Although David Lemieux has been beaten in his career, with a fight count of 41 fights and a 10 year long career he approaches the end of his career with a record of 36-4-0. He made his debut in April 2007 at the age of 18. Lemieux's longest KO streak is 20 fights long out of his 41 career fights.

In a memorable debut Lemieux gained a TKO win against Jose Candelario torres in a 4 round contest, becoming the 2nd person to stop Candelario torres. Following his debut, Lemieux had an impressive start to his career as he went on to win his next 20 fights including 5 times in 2007 and 8 times in 2009 against the likes of Donny Mccrary, Bladimir Hernandez cazares and Delray Raines.

Lemieux entered his next fight with 23 wins and took this to 24 with a win against Hector Camacho jr on October 29th, 2010. Camacho jr was stopped in the 1st round via KO meaning Lemieux was the 2nd person to stop this opponent in his career.

On November 30th, 2013, Lemieux went into action again and beat Jose miguel Torres taking the winning record to 31 wins. Torres was stopped in the 7th round via TKO crowning Lemieux as the first person to stop this opponent. Fights against Fernando Guerrero, Hassan N'dam n'jikam and Gabriel Rosado followed where he won all 3 fights taking his winning streak to 34 wins.

Lemieux lost to Gennady Golovkin in his next fight. Taking place on October 17th, 2015, Lemieux's career record after this fight stood at 34-3-0. Golovkin upset Lemieux in a 12 round fight, stopping him in the 8th round and becoming only the 2nd person to stop Lemieux.

Lemieux went into his next fight against Billy joe Saunders on December 16th, 2017 with a career record of 36 wins. A valiant effort from Lemieux, but one that was out of his reach technically. The fight came to a close after the final bell in a UD loss for Lemieux. A setback for Lemieux pro journey for sure. 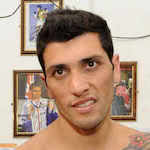