Martin joseph Ward started his career aged 29 on September 2012. After 20 fights, Ward remains unbeaten with no sign of being beaten after building up his record of 18 wins and a career lasting 5 years so far. Between September 2012 and May 2014, Ward had his longest winning streak of 9 fights. In his 20 fights, his longest KO streak is 4 fights long.

Ready to showcase his talent in the pro ranks, Ward defeated Kristian Laight over 4 rounds in his debut to secure his first win (PTS) against a durable Laight. Following on from his debut, Ward continued his career by fighting in a further 10 fights. In this time he fought Ben Wager, Reynaldo Cajina and Craig Woodruff to name just a few, fighting 4 times in 2012 and 3 times in 2014 in this period.

Craig Woodruff was up next for Ward on March 1st, 2014. Ward continued with his winning streak by beating Woodruff. Ward's fight against Craig Woodruff came in the 4th round of a 6 round fight via TKO. Ward became the first person to stop Woodruff.

Pushing his career further, Ward fought Maxi Hughes on April 11th, 2015 adding to his winning record. Ward's fight against Maxi Hughes came in the 5th round of a 10 round fight via RTD. Ward became the first person to stop Hughes. Ward then went on to win a further 3 fights taking his record to 14 wins, 0 losses and 2 draws.

Ward kept his losses at 0 by beating Andy Townend on September 10th, 2016. Ward's fight against Andy Townend came in the 8th round of a 12 round fight via TKO. Ward became the first person to stop Townend. Ward then went on to win again against Ronnie Clark setting him up well for his next pro fight.

Pushing his career further, Ward fought Maxi Hughes on March 25th, 2017 adding to his winning record. Ward was the 3rd person to beat Maxi Hughes where he showed his talent as a technical boxer, beating him over 12 rounds in his 19th professional fight.

Ensuring he added another win to his tally, Martin joseph Ward defeated Anthony Cacace on July 15th, 2017 in his latest fight. This was another staggering performance by Ward, picking apart Cacace over the 12 rounds and being the first of 15 opponents to defeat Cacace. 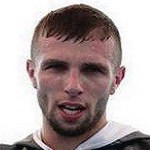