Although beaten, James Tennyson has gained plenty of experience over 14 fights and a 4 year long career so far. He now moves on to see just how far he can go as he approaches the later stage of his career. Tennyson's longest KO streak is 4 fights long out of his 14 career fights.

In a memorable debut Tennyson gained a TKO win against Fikret Remziev in a 4 round contest, becoming the 13th person to stop Remziev. Tennyson built on his successful start to his career by fighting 4 times in 2012 and 3 times in 2013 which included fights against David Kis, David Kanalas and Mickey Coveney to name just a few.

Unfortunately, the first defeat of Tennyson's career came against Pavels Senkovs on October 19th, 2013 in Tennyson's 9th professional fight. Pavels Senkovs became the first person to stop Tennyson. The win came via TKO in the 2nd round of a 6 round bout. Taking his record to 10 wins, 1 losses and 0 draws, Tennyson then went on to win a further 2 fights.

Simas Volosinas was the next fight for Tennyson on February 7th, 2015 and also his next career win. The 6 round fight ended in the 2nd round via TKO crowning Tennyson as only the 4th to stop Volosinas.

On October 17th, 2015, Tennyson was in action again with a win via TKO against George Gachechiladze taking his mostly successful record to 12-1-0. The win came in the 2nd round of a 8 round fight via TKO. Tennyson was the 12th person to stop George in his career.

In Tennyson's most recent fight, Declan Geraghty was handed a beating by Tennyson on March 10th, 2017 to ensure his win record increased further again to 13 wins. The most recent outing for Tennyson proved one that was easier than expected. Geraghty was left wanting as the fight ended in round 6 of 10 (TKO). Tennyson now moves on to hopefully face some of the bigger names in the division. 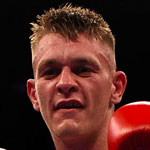