Femi Fehintola's debut fight took place on September 2003 when he was 21 years of age. His career has spanned 11 years to date and whilst he's now in the later stages of his career, he has amassed a record of 27-4-0 over the course of his 31 fight career. The longest KO streak that Fehintola has ever had is 1 throughout his 31 fights and his longest winning streak is 14 wins. This started on September 2003 and came to an end on May 2006.

In a successful debut, Fehintola fought John paul Ryan in a 6 round fight defeating him over the distance and becoming only the 10th person to defeat Ryan. Continuing on from his debut, Fehintola had an impressive start to his career as he went on to fight 16 fights including 3 times in 2003, 5 times in 2004 and 8 times through 2005, 2006 and 2007 against fighters such as Ivo Golakov, Rakhim Minhalieyev and Nikita Lukin.

Stevie Bell was the next fight for Fehintola on October 6th, 2007 and also his next career win. An impressive win for Fehintola as he proves his technical boxing talent by taking Bell the 10 round distance and becoming the first person to beat Bell. The fight ended in a PTS victory for Fehintola. Another win followed for Fehintola taking his win tally to 19 wins.

Fehintola's career took a knock with a loss against Ryan Barrett on October 25th, 2008 taking his record to 19-2-0. Fehintola failed to go into the later rounds with Barrett, with Barrett stopping him in the 3rd round and becoming the 2nd person to stop Fehintola. Fights against boxers including Aleksas Vaseris, Dougie Curran and Daniel Thorpe followed where he won 8 fights taking his winning streak to 26 wins.

Fehintola went into his next career fight with a record of 26-3-0 and took this to 27 wins with a win against Ibrar Riyaz on November 30th, 2014. Fehintola was the 66th person to beat Ibrar Riyaz where he showed his talent as a technical boxer, beating him over 6 rounds in his 30th professional fight.

On May 2nd, 2015, Fehintola took on and was defeated by Andy Townend meaning his career tally went to 27-4-0 Fehintola struggled from the off with Townend, suffering his 3rd stoppage defeat out of 31 career fights. The latest loss on Fehintola's journey came via TKO in round 4. 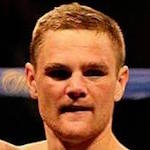