An explosive pro debut saw Hatley face Larry Upchurch in a 4 round debut fight. Charles became only the 2nd person to stop Upchurch shy of the full distance, stopping him in the 1st. Hatley continued his mostly successful career with numerous fights following his debut against boxers including Emanuel Augustus, Marcos Primera and Eloy Suarez. Fights included fighting once in 2008, 7 times in 2009 and 7 times through 2010 and 2011.

On October 17th, 2009 Hatley fought and beat Johnny Suarez (5-1-2) to continue his unbeaten streak. Suarez was stopped in the 4th round via TKO crowning Hatley as the first person to stop this opponent. Hatley continued his success in the next 12 fights taking his record to 17 wins, 0 losses and 1 draws.

Hatley's next defeat of his career came against Lanardo Tyner on August 18th, 2012 taking his career record to 17-1-1. Lanardo Tyner became the first person to stop and also the first to defeat Hatley. The win came via TKO in the 1st round of a 10 round bout. Hatley then went on to win a further 4 fights taking his record to 21 wins, 1 losses and 1 draws.

On January 18th, 2014, Hatley was in action again with a win via TKO against Mark Suarez taking his mostly successful record to 22-1-1. The win happened in the 1st round of a 10 round fight via TKO. Hatley then went on to win a further 3 fights taking his record to 25 wins, 1 losses and 1 draws.

On November 11th, 2015, Hatley went into action again and beat Anthony Mundine taking the winning record to 26 wins. The win against Mundine happened in the 11th round of a 12 round fight via TKO.

Taking another knock in his career, Hatley fought Jermell Charlo on April 22nd, 2017 and was defeated by Charlo. A great performance by opponent Charlo added a 2nd stoppage defeat to Hatley's career. Hatley was outmatched and the fight was brought to a halt in round 6 via KO. 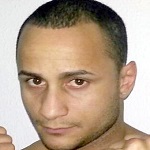