Age 32 orthodox Jermell Charlo has now fought 30 fights and remains unbeaten with a record of 30-0-0. Having started his career on October 2017 at age 17, Charlo shows no signs of slowing down as he continues his rise as a pro. Charlo's longest win streak is 30 fights between December 2007 and October 2017. His longest KO streak in his 30 fights is 4 fights long.

In a great first showing as a pro, Charlo took Corey Sommerville the full 4 to claim his first win and became the first person to take Sommerville the full distance. Charlo then went on to win his next 15 fights - fighting once in 2007, 4 times in 2008 and 10 times through 2009, 2010 and 2011 racking up wins against Larry Smith, Luis Grajeda and Abdon Lozano amongst others.

Carlos Garcia was beaten next on April 4th, 2009 meaning Charlo could maintain his unbeaten streak. In 2009 Charlo fought his next opponent Carlos Garcia and defeated him via UD. Charlo was the 3rd person to go the distance with Garcia. 9 wins followed where Charlo went on to be the first to stop Federico Flores jr, First to beat Luis Grajeda and first to stop Abdon Lozano.

On March 24th, 2012, Charlo was in action again beating Chris Chatman taking his win streak to 17 wins. Chatman proved to be no match for Charlo, and Charlo became the first person to stop Chatman via TKO during round 3. 4 wins followed where Charlo went on to be the 2nd person to stop Harry joe Yorgey (Round 8 KO), 2nd person to stop Denis Douglin and 5th person to beat Demetrius Hopkins.

Charlo then went on to fight and beat Charles Hatley on April 22nd, 2017 maintaining his unbeaten record. The win against Hatley came in the 6th round of a 12 round fight via KO. Charlo was the 2nd person to stop Hatley.

Erickson Lubin was beaten by Jermell Charlo in Charlo's most recent fight on October 14th, 2017 to ensure his unbeaten run continued. In an impressive showing of his boxing ability, Charlo outclassed Lubin in his latest performance, claiming the round 1 KO and becoming the first person of 11 to have stopped Lubin. 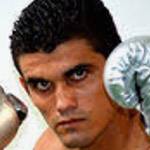