Before finishing his career in June 2005 orthodox boxer Garcia built up a record of 25 wins, 2 draws, and 5 losses, starting at age 21 on November 1995 and ending 9 years later at . Between November 1995 and February 2000, Garcia had his longest winning streak of 14 fights. In his 32 fights, his longest KO streak is 3 fights long.

Starting as he means to go on, Garcia got off to an explosive start in his debut, defeating Garfield Knowles in 2 rounds and becoming the only person to have stopped Knowles to date. Garcia continued his mostly successful career with numerous fights following his debut against boxers including Juan Meza, Robert Galstijan and Eric Holland. Fights included fighting 2 times in 1995, 4 times in 1996 and 10 times through 1997, 1998 and 1999.

Garcia went into his next career fight with a record of 3-0-1 and took this to 4 wins with a win against David Williams on June 26th, 1996. Showing his class against Williams, Garcia was the 2nd person to go the distance with this opponent. Garcia continued his success in the next 16 fights taking his record to 19 wins, 0 losses and 2 draws.

On February 11th, 2001, Garcia took on and was defeated by Tito Mendoza meaning his career tally went to 19-1-2. Garcia's first defeat came over the full distance against Tito Mendoza on February 11th, 2001. The fight went to the judges in a UD loss for Garcia. 6 wins followed where Garcia went on to be the 4th person to go the distance with Irving Garcia, 3rd person to stop Chantel Stanciel and 5th person to stop Bruce Corby.

Juan carlos Candelo was next in line for Garcia where unfortunately, he was defeated on July 26th, 2003 taking his record to 25-2-2. Juan carlos Candelo became the first person to stop Garcia. The win came via TKO in the 8th round of a 12 round bout.

Taking another knock in his career, Verno Phillips was next in line for Garcia with Phillips coming out victorious. Garcia career was at 25-3-2 following the fight. Garcia was beaten by Verno Phillips in the 1st round. Garcia had only ever been stopped 2 times previously in his career.

The next defeat of Garcia's career came against Marcos Primera on June 11th, 2005. This took his career record to 25-5-2. Showing he is not at the level he once was, Garcia took a decision loss to end his 32 fight career. The fight ended in a MD loss for Garcia. 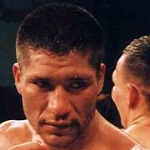