Kid Galahad, born March 3rd 1990 made his debut in September 2009. After not putting a foot wrong in 23 fights so far and building an unbeaten record of 23-0-0 it's still unclear just how far Galahad can go at the age of 32. Galahad's longest win streak is 23 fights between September 2009 and July 2017. His longest KO streak in his 23 fights is 5 fights long.

In September 2009, Galahad took Delroy Spencer the full 4 round distance in a PTS decision debut win on the judges scorecards. Galahad continued on his journey to success by fighting 2 times in 2009, 3 times in 2010 and 7 times through 2011 and 2012 beating fighters such as Jason Booth, Paul Griffin and Josh Wale in his next 12 fights.

Isaac Nettey was beaten next on June 8th, 2013 meaning Galahad could maintain his unbeaten streak. Nettey was stopped in the 5th round via TKO crowning Galahad as the first person to stop this opponent.

Galahad then went on to fight and beat Adeilson Dos santos on September 20th, 2014 maintaining his unbeaten record. In what was a true showing of Galahad's technical ability, Galahad got the decision in the 12 round fight, and became the first person to beat Dos santos. Galahad's win streak of 18 rose to 21 following 3 great wins, becoming the 6th person to stop Simas Volosinas, 5th person to stop Emiliano Salvini (Round 4 TKO) and 6th person to stop Reynaldo Mora.

Galahad entered his next fight with 21 wins and took this to 22 with a win against Leonel Hernandez on February 4th, 2017. The win came in the 3rd round of a 8 round fight via RTD. Galahad was the 4th person to stop Leonel in his career.

Kid Galahad went into his latest fight with Jose Cayetano on July 15th, 2017 with 22 wins and he continued this winning streak taking it to 23 wins. Taking his total win streak to 23 wins, Galahad defeated Cayetano in the 12 round fight. The win came via TKO in the 10th round. Galahad was the 2nd to stop Cayetano. 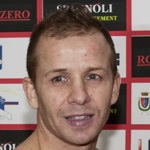