Josenilson Dos santos's debut fight took place on August 2006 when he was 21 years of age. His career has spanned 9 years to date and whilst he's now in the later stages of his career, he has amassed a record of 27-4-0 over the course of his 31 fight career. Between August 2006 and October 2009, Dos santos had his longest winning streak of 14 fights. In his 31 fights, his longest KO streak is 7 fights long.

Dos santos made an impressive debut on August 2006, showing his class and technical boxing skill Dos santos went the full 4 rounds with Bahia cardoso and became the first person to do so. Dos santos continued his mostly successful career with numerous fights following his debut against boxers including Edilson Rio, Leandro Almagro and David ezequiel Pared. Fights included fighting once in 2006, 5 times in 2007 and 10 times through 2008, 2009 and 2010.

The first defeat of Dos santos's career came against Diego Magdaleno on November 13th, 2009. This took his career record to 14-1-0. Dos santos's technical boxing ability was put to the test as he got outpointed in the 8 round fight against the better man. Magdaleno gave Dos santos his first professional loss of his 15 fight career to date. 4 wins followed where Dos santos went on to be the 2nd person to stop Fabian Marimon, 4th person to defeat Jeremias ezequiel Castillo and 10th person to stop Joel Pereira da silva (Round 2 TKO).

Genival Rock da silva was the next fight for Dos santos on February 26th, 2011 and also his next career win. Becoming the first person to stop Genival Rock da silva, Dos santos beat Rock da silva via TKO in the 3rd round of a 6 round fight. Fights against Carlos ricardo Rodriguez, Idiozan Matos, Lazaro Santos de jesus and 4 others followed where he won all 7 fights taking his winning streak to 26 wins.

Dos santos went into his next fight against Paulus Moses on October 4th, 2014 with a career record of 27-3-0. Dos santos fought Paulus Moses and was defeated via KO in the 12 round bout. This was Dos santos's 2nd stoppage defeat in his career which came in the 6th round.

On December 11th, 2015, Dos santos took on and was defeated by Felix Verdejo meaning his career tally went to 27-4-0 Left wondering where Dos santos's career will go next, Verdejo became only the 3rd man to stop Dos santos in the 2nd round of a 10 round fight. 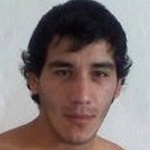