Diego Magdaleno started off his pro career aged 21 and currently has a record of 28-2-0. Magdaleno now looks to build on the experience gained in his first 30 fights. Magdaleno's longest KO streak is 4 fights long out of his 30 career fights.

Magdaleno fought and defeated Francisco Palacios in a successful 4 round debut. The decision was left to the judges after the final bell in a UD result favouring Magdaleno. Magdaleno continued on his journey to success by fighting once in 2007, 6 times in 2008 and 8 times through 2009 and 2010 beating fighters such as Manuel Perez, Floriano Pagliara and Josenilson Dos santos in his next 15 fights.

Next was Angel Rodriguez on June 26th, 2008 where Magdaleno took the win continuing his unbeaten streak. Angel Rodriguez was Magdaleno's next opponent of his career in 2008. The fight was scheduled for 4 and Magdaleno was the 2nd person to go the distance with Rodriguez. Magdaleno then went on to win a further 17 fights taking his record to 21 wins, 0 losses and 0 draws.

Fernando Beltran was up next for Magdaleno on March 23rd, 2012. Magdaleno continued with his winning streak by beating Beltran. Becoming the first person to stop Fernando Beltran, Magdaleno beat Beltran via TKO in the 7th round of a 10 round fight. Taking his record to 23-0-0. Magdaleno then went on to win his next fight against Antonio Davis.

Diego Magdaleno Vs Jose a Gonzalez

Magdaleno kept his losses at 1 by beating Jose a Gonzalez on June 26th, 2015. The 12 round fight ended in the 7th round via TKO crowning Magdaleno as only the 2nd to stop Gonzalez.

Magdaleno went into his next fight against Terry Flanagan on October 10th, 2015 with a career record of 28 wins. This bout proved to be the toughest of Magdaleno's 30 career fights to date. Flanagan was too skilful and took 2 rounds to dispose of Magdaleno. This was Magdaleno's first stoppage defeat as he looks to move on and rebuild going forwards. 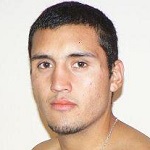