An explosive pro debut saw Chudinov face Shawn Kirk in a 4 round debut fight. Fedor became only the 5th person to stop Kirk shy of the full distance, stopping him in the 1st. Continuing on from his winning debut, Chudinov's winning streak continued with wins against fighters included Francis Cheka, Karama Nyilawila and Jimmy Colas fighting 3 times in 2009, once in 2010 and 5 times through 2011, 2012 and 2013.

Andy Perez was Chudinov's next fight on June 28th, 2014 and also his next win in his career. Perez was stopped in the 3rd round via TKO meaning Chudinov was the first person to stop this opponent.

Furthering his career, Chudinov fought Ben Mcculloch on December 11th, 2014 and advanced his winning streak to 12 wins. Becoming the first person to stop Ben Mcculloch, Chudinov beat Mcculloch via KO in the 2nd round of a 12 round fight. Chudinov fought boxers including Felix Sturm and Frank Buglioni and he went on to win another 2 fights.

Ensuring he added another win to his tally, Fedor Chudinov defeated Jonathan geronimo Barbadillo on July 22nd, 2017 in his latest fight. Chudinov's win against Barbadillo was only the 4th time Barbadillo had been stopped. The fight finished in the 2nd round of a 10 round fight via TKO. 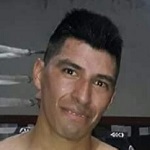