Although beaten, Rafael Bejaran has gained plenty of experience over 19 fights and a 8 year long career so far. He now moves on to see just how far he can go as he approaches the later stage of his career. Between February 2008 and November 2010, Bejaran had his longest winning streak of 11 fights. In his 19 fights, his longest KO streak is 4 fights long.

Ready to showcase his talent in the pro ranks, Bejaran defeated Anthony Osbourne over 4 rounds in his debut to secure his first win (UD) against a durable Osbourne. Continuing on from his winning debut, Bejaran's winning streak continued with wins against fighters included Anthony Reese, Alex Quiroga and Alexis Divison fighting 8 times in 2008 and once in 2010.

Alexis Divison was beaten next on November 19th, 2008 meaning Bejaran could maintain his unbeaten streak. In 2008 Bejaran fought his next opponent Alexis Divison and defeated him via UD. Bejaran was the 6th person to go the distance with Divison. Bejaran then went on to face Alex Quiroga where he added another win to his tally.

Taking the first knock of his career, Bejaran fought Cagri Ermis on April 9th, 2011 and was defeated by Ermis. Bejaran's technical boxing ability was put to the test as he got outpointed in the 8 round fight against the better man. Ermis gave Bejaran his first professional loss of his 12 fight career to date. Bejaran then went on to win again against Milan Ruso setting him up well for his next pro fight.

Bejaran kept his losses at 1 by beating Goekalp Oezekler on June 11th, 2011. Becoming the first person to stop Goekalp Oezekler, Bejaran beat Oezekler via KO in the 8th round of a 12 round fight. Bejaran continued his success in the next 3 fights taking his record to 15 wins, 2 losses and 0 draws.

Keeping his losses at 2, Bejaran fought on May 4th, 2013 beating Ferenc Zold via TKO. This took his record to 16-2-0 showing quite the successful career to date. Zold was stopped in the 3rd round via TKO meaning Bejaran was the 10th person to stop this opponent in his career.

The wins continued with the defeat of David Makaradze on March 20th, 2016 in Bejaran's most recent fight taking his winning record to 17 wins. Bejaran became only the 10th person to defeat David Makaradze in his 33 long fight career, taking his win tally to 17 via the judges decision (UD, round 10). 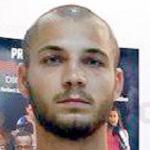