After a debut fight on May 2011, Braulio Rodriguez (age 32) has now built a record of 16 wins, 1 losses, 0 draws over a 17 fight career so far. The longest win streak that Rodriguez has ever recorded was between May 2011 and November 2013 when it totaled 15 wins. Rodriguez's longest KO streak is 15 fights long.

An explosive pro debut saw Rodriguez face Milciades Mosquea in a 4 round debut fight. Braulio became only the 2nd person to stop Mosquea shy of the full distance, stopping him in the 3rd. Continuing on from his winning debut, Rodriguez's winning streak continued with wins against fighters included John Casado, Juan carlos Rosario and William Tapia fighting 5 times in 2011 and 4 times in 2012.

On August 24th, 2013 Rodriguez fought and beat Alan Guzman (7-0-0) to continue his unbeaten streak. Guzman was stopped in the 5th round via TKO crowning Rodriguez as the first person to stop this opponent.

Next was Oscar Arenas on November 16th, 2013 where Rodriguez took the win continuing his unbeaten streak. Arenas was stopped in the 4th round via KO meaning Rodriguez was the 8th person to stop this opponent.

The wins continued with the defeat of Francisco Lorenzo on September 27th, 2014 in Rodriguez's most recent fight taking his winning record to 16 wins. Ending via KO, Rodriguez became the 3rd fighter to stop Lorenzo. The defeat came in the 1st round of a 10 round fight. 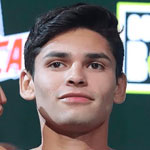