Setting up his pro career well and building his confidence in the pro ring, Ziani became the 3rd person to take Jerry Cagniac the distance and claimed a PTS debut win. Ziani continued his mostly successful career with numerous fights following his debut against boxers including Carel Sandon, Virgile Degonzaga and Mehdi Boubekeur. Fights included fighting 5 times in 2010 and once in 2012.

Pushing his career further, Ziani fought Mehdi Bounakab on May 7th, 2011 adding to his winning record. In 2011 Ziani fought his next opponent Mehdi Bounakab and defeated him via UD. Ziani was the 2nd person to go the distance with Bounakab. Ziani's wins continued and went from 7 wins to 8 after he then defeated Sezer Erunsal.

Ziani went into his next career fight with a record of 8-0-1 and took this to 9 wins with a win against Carel Sandon on July 8th, 2011. Becoming the first person to stop Carel Sandon, Ziani beat Sandon via RTD in the 9th round of a 10 round fight. Fights against Sebastien Benito, Ruddy Encarnacion, Andrey Kudryavtsev and 3 others followed where he won all 6 fights taking his winning streak to 15 wins.

On December 7th, 2013, Ziani took on and was defeated by Samir Kasmi meaning his career tally went to 15-1-1. Taking the first setback of his career, the December 7th, 2013 Kasmi defeat went the full distance and ended via UD. Racking up wins against Sebastien Cornu and Yoann Portailler, Ziani went on to fight and win these next 2 fights.

Pushing his career further, Ziani fought Alex Bone on January 30th, 2015 adding to his winning record. In 2015 Ziani fought his next opponent in Alex Bone. A challenging 10 round fight that ended in Ziani's favour as the judges awarded Ziani the PTS victory. Ziani was the 20th person to defeat Bone.

Samir Ziani added another win to his record by beating Sebastien Cornu on June 12th, 2015, upping his record to 19 wins. Ziani was the 3rd fighter to stop Cornu in round 8 of a 10 round fight, Ziani won via TKO. 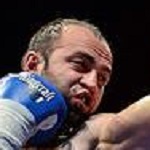