Starting his career off on February 2011, Richard Commey is now a 5 year pro with an ever growing wealth of experience. With 22 fights under his belt it's still unclear how far Commey can push himself or if we've already seen the best of him. Commey's longest KO streak is 17 fights long out of his 22 pro career fights.

In February 2011 Commey faced Baba Nsor in his debut bout over 6 rounds, but only 2 were needed as Commey became the quickest person ever to stop Nsor via a 2 round TKO victory. Following his debut, Commey had an impressive start to his career as he went on to win his next 11 fights including 11 times in 2011 against the likes of Korley Collison, Kuma Doe and Yaw Sakiya.

Next was Simas Volosinas on July 7th, 2012 where Commey took the win continuing his unbeaten streak. Commey was the first person to stop Simas Volosinas and he did it in the 3rd round via TKO.

Commey entered his next fight with 12 wins and took this to 13 with a win against Kris Hughes on September 15th, 2012. Commey was the 2nd person to stop Kris and he did it in the 4th round via RTD. The fight was due to last 8 rounds. Commey then went on to win a further 3 fights taking his record to 16 wins, 0 losses and 0 draws.

On December 26th, 2013 Commey fought and beat Prince Ofotsu (15-3-0) to continue his unbeaten streak. Ofotsu was stopped in the 8th round via TKO crowning Commey as the first person to stop this opponent. Taking his record to 19 wins, 0 losses and 0 draws, Commey then went on to win a further 2 fights.

Next was Kakhaber Avetisian on October 17th, 2015 where Commey took the win continuing his unbeaten streak. Avetisian was stopped in the 5th round via TKO meaning Commey was the 9th person to stop this opponent.

On September 9th, 2016, Commey took on and was defeated by Robert Easter jr. in his first career defeat meaning his career tally went to 20-1-0. Commey's technical boxing ability was put to the test as he got outpointed in the 12 round fight against the better man. Easter jr. Gave Commey his first professional loss of his 21 fight career to date.

Commey's next defeat of his career came against Denis Shafikov on December 2nd, 2016. A valiant effort from Commey, but one that was out of his reach technically. The fight came to a close after the final bell in a SD loss for Commey. A setback for Commey pro journey for sure. 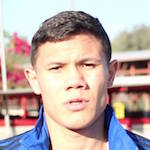