Born December 24th 1983 Jussi Koivula (aged 38) has built up a good career record of 21-4-1. With plenty of experience and now 26 fights as a pro, Koivula hopes to move on to better things in future as he moves into the later stages of his career. The longest KO streak that Koivula has ever had is 2 throughout his 26 fights and his longest winning streak is 13 wins. This started on August 2008 and came to an end on February 2013.

In a memorable debut Koivula gained a TKO win against Tibor Rafael in a 4 round contest, becoming the 24th person to stop Rafael. Koivula rise in boxing continued with 13 wins against fighters such as Jose Del rio, Giorgi Ungiadze and Jarkko Jussila.

Koivula then went on to fight and beat Jarkko Jussila on January 21st, 2012 maintaining his unbeaten record. Koivula was the 3rd person to go the distance with Jussila. Koivula fought Jarkko Jussila in 2012, the result was via UD. 2 wins followed taking Koivula's winning streak to 13 wins.

On April 20th, 2013, Koivula took on and was defeated by Lukasz Maciec in his first career defeat meaning his career tally went to 13-1-0. Koivula faced the first defeat of his career against Lukasz Maciec in the 5th round of a 10 round fight via TKO.

Koivula went into his next career fight with a record of 13-1-0 and took this to 14 wins with a win against Lukasz Janik on August 17th, 2013. Koivula's fight against Lukasz Janik came in the 6th round of a 8 round fight via KO. Koivula became the first person to stop Janik. Koivula continued his success in the next 7 fights taking his record to 19 wins, 2 losses and 1 draws.

Koivula lost to Leonard Bundu in his next fight. Taking place on April 22nd, 2016, Koivula's career record after this fight stood at 19-3-1. Koivula fought Leonard Bundu and was defeated via TKO in the 12 round bout. This was Koivula's 2nd stoppage defeat in his career which came in the 9th round. Taking his record to 20-3-1. Koivula then went on to win his next fight against Srecko Janjic.

Unknown was the next fight for Koivula on June 9th, 2016 and also his next career win. The win against happened in the 3rd round of a 6 round fight via TKO.

The next defeat of Koivula's career came against Samuel Vargas on November 11th, 2017. This took his career record to 21-4-1. This latest challenge for Koivula proved to be too much for him, taking a SD loss to the better technical fighter over the 10 rounds and leaving Koivula wondering which direction his career will head next. 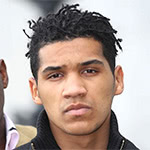