An explosive pro debut saw Ali face Ricky Thompson in a 4 round debut fight. Sadam became only the 2nd person to stop Thompson shy of the full distance, stopping him in the 1st. Ali rise in boxing continued with 13 wins against fighters such as Lenin Arroyo, John Revish and Gary Bergeron.

Bryan Abraham was beaten next on April 25th, 2009 meaning Ali could maintain his unbeaten streak. In 2009 Ali fought his next opponent Bryan Abraham and defeated him via UD. Ali was the 2nd person to go the distance with Abraham. Fights against Jesus Selig, Jeremy Bryan, Michael Clark and 14 others followed where he won all 17 fights taking his winning streak to 20 wins.

On November 8th, 2014 Ali fought and beat Luis carlos Abregu (36-1-0) to continue his unbeaten streak. Becoming the first person to stop Luis carlos Abregu, Ali beat Abregu via TKO in the 9th round of a 10 round fight. Ali then went on to win again against Francisco Santana setting him up well for his next pro fight.

Taking the first knock of his career, Ali fought Jessie Vargas on March 5th, 2016 and was defeated by Vargas. Vargas was a push too far for Ali and after a tough fight Vargas became the first person to beat and stop Ali in round 9.

Taking another knock in his career, Ali fought Jaime Munguia on May 12th, 2018 and was defeated by Munguia. A great performance by opponent Munguia added a 2nd stoppage defeat to Ali's career. Ali was outmatched and the fight was brought to a halt in round 4 via TKO. 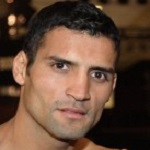