Born December 26th 1986 Jesus m Rojas (aged 35) has built up a good career record of 25-1-2. With plenty of experience and now 29 fights as a pro, Rojas hopes to move on to better things in future as he moves into the later stages of his career. The longest KO streak that Rojas has ever had is 5 throughout his 29 fights and his longest winning streak is 13 wins. This started on March 2006 and came to an end on July 2008.

Getting rid of his debut fight nerves early, Rojas took on Christopher Sanchez in March 2006 and claimed a stoppage victory (round 1, TKO). Rojas was the first person to have ever stopped Sanchez. Rojas continued his pro journey, which was mostly successful at this point, by fighting 15 fights following his debut. Fights against boxers such as Anyetei Laryea, Torrence Daniels and Alex Baba followed including 5 times in 2006, 5 times in 2007 and 5 times through 2008, 2009 and 2010.

Alex Baba was beaten next on June 28th, 2008 meaning Rojas could maintain his unbeaten streak. Rojas was the 2nd person to stop Alex and he did it in the 6th round via TKO. Another win followed for Rojas taking his win tally to 13 wins.

The first defeat of Rojas's career came against Jose angel Beranza on December 6th, 2008. This took his career record to 13-1-0. Taking the first setback of his career, the December 6th, 2008 Beranza defeat went the full distance and ended via UD. Fights against boxers including Juan jose Beltran, Reynaldo Lopez and Isaac Hidalgo followed where he won 8 fights taking his winning streak to 19 wins.

Juan carlos Pena was the next fight for Rojas on June 28th, 2014 and also his next career win. Rojas was the first person to stop Juan carlos Pena and he did it in the 6th round via TKO. 4 wins followed where Rojas went on to fight Kiun Evans, Braulio Santos and Jose angel Beranza amongst others, prolonging his win streak.

Jesus a Valdez was the next fight for Rojas on September 17th, 2016 and also his next career win. Rojas was the first person to stop Jesus a Valdez and he did it in the 5th round via TKO.

Jesus m Rojas added another win to his record by beating Abraham Lopez on May 5th, 2017, upping his record to 25 wins. It didn't take long for Rojas to work Lopez out in his most recent fight. With a stoppage in the 8th round, Jesus m Rojas became the first fighter to stop Lopez via TKO and moves on to bigger things. 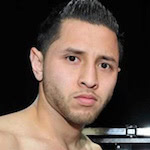