Luis Melendez's debut fight took place on February 2001 when he was 21 years of age. His career has spanned 14 years to date and whilst he's now in the later stages of his career, he has amassed a record of 41-10-1 over the course of his 52 fight career. Between February 2001 and October 2006, Melendez had his longest winning streak of 12 fights. In his 52 fights, his longest KO streak is 6 fights long.

An explosive pro debut saw Melendez face Victor Peralta in a 0 round debut fight. Luis became only the 8th person to stop Peralta shy of the full distance, stopping him in the 1st. Continuing on from his debut, Melendez had an impressive start to his career as he went on to fight 26 fights including 2 times in 2001, 4 times in 2002 and 20 times between 2003 and 2006 against fighters such as Yogli Herrera, Pedro Rincon miranda and Eduardo Pacheco.

On May 7th, 2004, Melendez took on and was defeated by Eduardo Pacheco meaning his career tally went to 12-1-1. Taking the first setback of his career, the May 7th, 2004 Pacheco defeat went the full distance and ended via PTS. 10 wins followed where Melendez went on to be the 5th person to go the distance with Elkin Zavaleta, first to stop Henry Torres and 8th person to beat Pedro Rincon miranda.

Yogli Herrera was the next fight for Melendez on September 16th, 2006 and also his next career win. Melendez's fight against Yogli Herrera came in the 7th round of a 8 round fight via TKO. Melendez became the first person to stop Herrera. Melendez continued his success in the next 3 fights taking his record to 25 wins, 2 losses and 1 draws.

Melendez's career took a knock with a loss against Michael Domingo on May 23rd, 2010 taking his record to 26-6-1. Melendez was stopped by Michael Domingo in the 2nd round of a 10 round fight via KO. It was Melendez's 2nd stoppage defeat in his career. Melendez's win streak of 26 rose to 40 following 14 wins against boxers such as Raul Hirales, Freddy Beleno, Miguel Martinez and 11 others.

Melendez lost to Juan carlos Sanchez jr in his next fight. Taking place on March 14th, 2015, Melendez's career record after this fight stood at 40-10-1. A valiant but fruitless effort for Melendez. Melendez fell just short and was defeated by Sanchez jr over the full 10 round distance.

In Melendez's most recent fight, Hugo Berrio was handed a beating by Melendez on February 19th, 2016 to ensure his win record increased further again to 41 wins. Melendez out-boxed Berrio over 10 rounds in his most recent performance, taking the win via UD and moving on to bigger and better things. 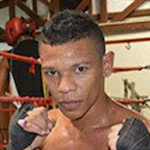