Showing his superior boxing ability in an impressive debut, Aston picked up the win against Iain Jackson and became only one of 4 people to have taken him the full 4 round distance. Continuing on from his debut, Aston had an impressive start to his career as he went on to fight 12 fights including 4 times in 2011 and 3 times in 2013 against fighters such as Harry Matthews, Kieron Gray and Paul Samuels.

Next was Kieron Gray on February 11th, 2012 where Aston took the win continuing his unbeaten streak. Gray was stopped in the 1st round via KO crowning Aston as the first person to stop this opponent. Racking up wins against Paul Samuels and Lee Noble, Aston went on to fight and win these next 2 fights.

Aston went into his next fight against Curtis Valentine on July 7th, 2012 with a career record of 7 wins. Valentine proved to be too much for Aston, destroying him in round 2 via TKO and bringing the first stoppage defeat of Aston's career. Aston's win streak of 7 rose to 9 following 2 wins against boxers such as Kiril Psonko and Gilson De jesus.

Furthering his career, Aston fought Harry Matthews on July 6th, 2013 and continued his career to a record of 10-1-1. The win came via RTD. Becoming the first person to stop Harry Matthews, Aston beat Matthews via RTD in the 4th round of a 10 round fight. 10 wins followed where Aston went on to fight Mariusz Biskupski, Nathan Graham and Stanislav Nenkov amongst others, prolonging his win streak.

Ahmet Patterson was next in line for Aston where unfortunately, he was defeated on January 22nd, 2016 taking his record to 18-3-2. Aston fought Ahmet Patterson and was defeated via TKO in the 12 round bout. This was Aston's 2nd stoppage defeat in his career which came in the 6th round.

Aston's next defeat of his career came against Craig Cunningham on May 21st, 2016. Once again Aston was in a tough fight, one that proved to be a step too far in Aston's latest fight. Opponent Cunningham fought well and was rewarded with a win, and crowned only the 3rd man to stop Aston in the process. The fight ended in round 6 via TKO. 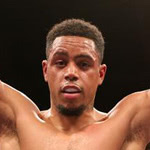