Dogboe, aged 18, started his career on August 2013. Although still relatively close to the start of his career, his record stands at 5 wins and will hopefully continue to rise. The longest win streak that Dogboe has ever recorded was between August 2013 and October 2015 when it totaled 5 wins. Dogboe's longest KO streak is 1 fights long.

In a memorable debut Dogboe gained a KO win against Csaba Toth in a 6 round contest, becoming the 12th person to stop Toth. Dogboe continued on his successful journey by fighting and beating his next 3 fights.

Next was Ronald Rodriguez on October 24th, 2014 where Dogboe took the win continuing his unbeaten streak. Becoming the 4th fighter to stop Rodriguez, Dogboe beat Rodriguez via TKO in the 2nd round of a 4 round fight.

Jazzma Hogue was up next for Dogboe on April 11th, 2015. Dogboe continued with his winning streak by beating Hogue. In 2015 Dogboe fought his next opponent in Jazzma Hogue. A challenging 6 round fight that ended in Dogboe's favour as the judges awarded Dogboe the UD victory. Dogboe was the 8th person to defeat Hogue.

Ensuring he remained unbeaten, Isaac Dogboe defeated Aminu Turkson on October 24th, 2015 in his most recent fight. Taking his total win streak to 5 wins, Dogboe defeated Turkson in the 8 round fight. The win came via TKO in the 6th round. Dogboe was the 24th to stop Turkson. 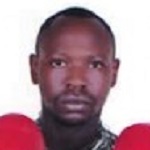