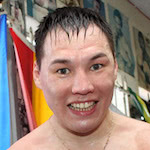 Although beaten, Ruslan Provodnikov has gained plenty of experience over 30 fights and a 9 year long career so far. He now moves on to see just how far he can go as he approaches the later stage of his career. He started his best winning streak on December 2006 however, this came to an end on October 2010. In this period he won a total of 17 fights.

Provodnikov made an impressive debut on December 2006, showing his class and technical boxing skill Provodnikov went the full 4 rounds with Artemiev and became the first person to do so. Continuing on from his successful debut, Provodnikov continued his winning streak by winning his next 15 fights. In this time he fought and beat Victor hugo Castro, Javier Jauregui and Abdulaziz Matazimov to name just a few, fighting once in 2006, 4 times in 2007 and 10 times through 2008, 2009 and 2010.

Next was Jose angel Roman on March 7th, 2008 where Provodnikov took the win continuing his unbeaten streak. Becoming the 2nd fighter to stop Roman, Provodnikov beat Roman via TKO in the 1st round of a 6 round fight. Provodnikov's win streak of 7 rose to 17 following 10 great wins, becoming the 5th person to stop Emanuel Augustus (Round 9 TKO), 5th person to stop Javier Jauregui and first boxer to go the distance with Brian Gordon.

The first defeat of Provodnikov's career came against Mauricio Herrera on January 7th, 2011. This took his career record to 17-1-0. Taking the first setback of his career, the January 7th, 2011 Herrera defeat went the full distance and ended via UD.

Ivan Popoca was the next fight for Provodnikov on April 15th, 2011 and also his next career win. Popoca was stopped in the 8th round via KO crowning Provodnikov as the first person to stop this opponent.

On June 11th, 2016, Provodnikov took on and was defeated by John Molina meaning his career tally went to 25-5-0 A blow for Provodnikov confidence, Provodnikov was taken the full distance by Molina and was handed a UD loss on the judges decision. A tough technical fight that leaves Provodnikov unsure on where his career will head next.