Lejarraga started his career on May 2013. His career record to date stands at 9 wins and he remains unbeaten. Between May 2013 and September 2016, Lejarraga had his longest winning streak of 9 fights. In his 9 fights, his longest KO streak is 4 fights long.

In an impressive debut, Lejarraga kept his calm and defeated Jair Cortes over 4 rounds via a judges decision. This was only the 5th time Cortes had been taken the full distance. Lejarraga's win streak continued to amass with 5 wins against fighters such as Ignasi Caballero, Nugzar Margvelashvili and Santos Medrano.

Next was Miguel Aguilar on September 20th, 2014 where Lejarraga took the win continuing his unbeaten streak. Becoming the 5th fighter to stop Aguilar, Lejarraga beat Aguilar via TKO in the 3rd round of a 6 round fight.

Kerman Lejarraga went into his latest fight with Giorgi Ungiadze on September 30th, 2016 with 8 wins and he continued this winning streak taking it to 9 wins. Lejarraga was the 6th fighter to stop Ungiadze in round 4 of a 10 round fight, Lejarraga won via TKO. 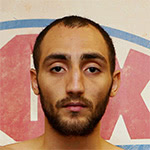