Although beaten, Dennis Tubieron has gained plenty of experience over 26 fights and a 6 year long career so far. He now moves on to see just how far he can go as he approaches the later stage of his career. Between June 2009 and September 2010, Tubieron had his longest winning streak of 9 fights. In his 26 fights, his longest KO streak is 2 fights long.

Tubieron's pro career began against Claver Ventolero (0-1-0) in a 4 round contest. Tubieron got the UD win via a judges decision. Continuing on from his debut, Tubieron had an impressive start to his career as he went on to fight 13 fights including 4 times in 2009 and 2 times in 2011 against fighters such as Richard Pumicpic, Ryan Origenes and Rey Liparanon.

Tubieron's career took a knock with a loss against Hiroki Shiino on June 10th, 2013 taking his record to 15-2-1. Shiino proved to be the biggest challenge to date for Tubieron, Tubieron never really got going in the fight and Shiino handed Tubieron his first stoppage defeat in the 2nd round of a 12 rounder. Tubieron's wins continued and went from 15 wins to 16 after he then defeated Rufino Mante.

Josh Warrington was next in line for Tubieron where unfortunately, he was defeated on April 11th, 2015 taking his record to 19-4-2. Outclassed, Tubieron took another loss as the judges awarded Warrington the UD win on a great performance.

Taking another knock in his career, Tubieron fought Ryosuke Iwasa on February 6th, 2016 and was defeated by Iwasa. Tubieron struggled from the off with Iwasa, suffering his 3rd stoppage defeat out of 26 career fights. The latest loss on Tubieron's journey came via KO in round 7. 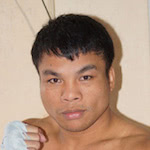