Justyn Hugh started off his pro career aged 24 and currently has a record of 11-2-1. Hugh now looks to build on the experience gained in his first 14 fights. Hugh's longest win streak is 9 fights between July 2008 and July 2011. His longest KO streak in his 14 fights is 2 fights long.

Hugh's pro career began against Pawel Trebinski (1-1-0) in a 6 round contest. Hugh got the PTS win via a judges decision. Following his debut, Hugh had an impressive start to his career as he went on to win his next 7 fights including 2 times in 2008, 4 times in 2009 and 1 times through 2010 and 2011 fighting the likes of as Pawel Trebinski, Phil Goodwin and Michael Banbula.

Phil Goodwin was beaten next on March 13th, 2009 meaning Hugh could maintain his unbeaten streak. Continuing his career, Hugh fought Phil Goodwin in 2009 over 6 rounds. Hugh was the 4th person to go the distance with Phil Goodwin. Hugh then went on to win again against Michael Banbula setting him up well for his next pro fight.

Hugh then went on to fight and beat Adam Wilcox on July 24th, 2009 maintaining his unbeaten record. In 2009 Hugh fought his next opponent Adam Wilcox and defeated him via PTS. Hugh was the 4th person to go the distance with Wilcox. Hugh's win streak of 5 rose to 11 following 6 wins against boxers such as Robert Studzinski, Phil Goodwin, Jeff Evans and 3 others.

Taking a knock to his career, Hugh fought and was defeated by Dean Francis on December 1st, 2012 taking his record to 11-1-1. Hugh faced the first defeat of his career against Dean Francis in the 10th round of a 10 round fight via TKO.

On February 23rd, 2013, Hugh took on and was defeated by Nathan King meaning his career tally went to 11-2-1 A blow for Hugh confidence, Hugh was taken the full distance by King and was handed a PTS loss on the judges decision. A tough technical fight that leaves Hugh unsure on where his career will head next. 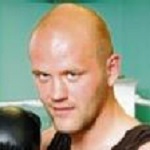