Brian Jones started off his pro career aged 25 and currently has a record of 9-3-0. Jones now looks to build on the experience gained in his first 12 fights. The longest win streak that Jones has ever recorded was between August 2012 and April 2013 when it totaled 7 wins. Jones's longest KO streak is 3 fights long.

Starting as he means to go on, Jones got off to an explosive start in his debut, defeating Stephan Nava in 1 rounds and becoming the only person to have stopped Nava to date. Following his debut, Jones had an impressive start to his career as he went on to win his next 6 fights including 3 times in 2012 and 3 times in 2013 fighting the likes of as Jose Martell, Johnny Frazier and Breuntre Miller.

Jones went into his next fight against Joaquin Chavez on August 9th, 2013 with a career record of 7 wins. Jones's technical boxing ability was put to the test as he got outpointed in the 4 round fight against the better man. Chavez gave Jones his first professional loss of his 8 fight career to date. Jones took on another 2 opponents next, racking up wins against Thomas Herrera and Jesus Gonzalez.

Jones lost to Juan Ocura in his next fight. Taking place on January 18th, 2014, Jones's career record after this fight stood at 9-2-0. Juan Ocura was the next opponent of Jones's career in 2014. The fight was scheduled for 6 and Jones was the 3rd person to go the distance with Ocura resulting in a loss for Jones. 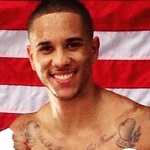