Starting his career in May 2008 at the age of 21, orthodox boxer Scott Sigmon has now been pro for 8 years and has built up a career of 27-10-1. Sigmon now moves into the final stages of his career. The longest KO streak that Sigmon has ever had is 4 throughout his 38 fights and his longest winning streak is 8 wins. This started on May 2008 and came to an end on April 2011.

A calm Sigmon made the statement he was hoping for in a 4 round fight against Abdul Gillard. Claiming the only stoppage defeat of Gillard's career in round 3 of the fight via TKO. Following on from his debut, Sigmon continued his mostly successful career by fighting in a further 19 fights. In this time he fought Toris Brewer, Tiwon Taylor and Julius Kennedy to name just a few, fighting 4 times in 2008, 4 times in 2009 and 11 times through 2010 and 2011 in this period.

Unfortunately, the first defeat of Sigmon's career came against Farah Ennis on June 21st, 2008 in Sigmon's 2nd professional fight. Coming into the fight with high confidence Sigmon fought his next fight against Farah Ennis on June 21st, 2008. Unfortunately, Sigmon was outclassed and lost the decision on the judges scorecards taking his record to 1-1-0. Sigmon then went on to win a further 23 fights taking his record to 22 wins, 3 losses and 0 draw.

Sigmon went into his next fight against Phillip Jackson benson on September 7th, 2013 with a career record of 23-5-0. Jackson benson upset Sigmon in a 10 round fight, stopping him in the 6th round and becoming only the 2nd person to stop Sigmon. Sigmon's record of 24-5-1 came following 2 fights against boxers such as 3rd person to stop Jessie Nicklow and fought Deandre Neal

Taking a knock to his career, Sigmon fought and was defeated by Caleb Truax on November 1st, 2014 taking his record to 24-6-1. Sigmon was stopped by Caleb Truax in the 8th round of a 10 round fight via TKO. It was Sigmon's 3rd stoppage defeat in his career.

Keeping his losses at 9, Sigmon fought on September 10th, 2016 beating Jeremy Broadwine via KO. This took his record to 27-9-1 showing quite the successful career to date. Sigmon was the 2nd person to stop Jeremy and he did it in the 4th round via KO. The fight was due to last 10 rounds.

Sigmon's next defeat of his career came against Matt Korobov on November 18th, 2016. A blow for Sigmon confidence, Sigmon was taken the full distance by Korobov and was handed a UD loss on the judges decision. A tough technical fight that leaves Sigmon unsure on where his career will head next. 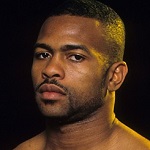