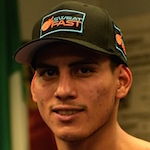 Jose Benavidez started off his pro career aged 17 and currently has a record of 25-1-0. Benavidez now looks to build on the experience gained in his first 26 fights. The longest win streak that Benavidez has ever recorded was between January 2010 and July 2016 when it totaled 25 wins. Benavidez's longest KO streak is 9 fights long.

Benavidez proved he was made for the pro ranks in his debut against Steven Cox, becoming the first person in Cox's 1 fights to stop him. The fight ended in round 1 of 4. Benavidez continued on his journey to success by fighting 9 times in 2010 and 4 times in 2011 beating fighters such as Manuel Delcid, Fernando Rodriguez and Winston Mathis in his next 13 fights.

Next was Winston Mathis on November 13th, 2010 where Benavidez took the win continuing his unbeaten streak. Mathis was a worthy challenger but Benavidez was too much and became the first person to stop Mathis via TKO during round 3. Fights against Corey Alarcon, Fernando Rodriguez, Josh Sosa and 3 others followed where he won all 6 fights taking his winning streak to 15 wins.

Javier Loya was beaten next on August 4th, 2012 meaning Benavidez could maintain his unbeaten streak. Loya was stopped in the 4th round via TKO crowning Benavidez as the first person to stop this opponent. Fights against Mauricio Herrera, Abraham alvarez Osuna rodriguez, Prince Doku jr and 3 others followed where he won all 6 fights taking his winning streak to 22 wins.

Jorge Paez jr was beaten next on May 15th, 2015 meaning Benavidez could maintain his unbeaten streak. Becoming the 2nd fighter to stop Paez jr, Benavidez beat Paez jr via TKO in the 12th round of a 12 round fight. Benavidez then went on to win again against Sidney Siqueira setting him up well for his next pro fight.

Next was Francisco Santana on July 23rd, 2016 where Benavidez took the win continuing his unbeaten streak. Benavidez was the 5th person to beat Francisco Santana where he showed his talent as a technical boxer, beating him over 10 rounds in his 25th professional fight.

Jose Benavidez was defeated by Terence Crawford on October 13th, 2018 in his next fight. Benavidez latest fight proved a step too far when he faced the first defeat of his career against Terence Crawford in the 12th round of a 12 round fight via TKO. Lets hope he comes back stronger.