Hall fought and defeated Abdul Mghrbel in a successful 6 round debut. The decision was left to the judges after the final bell in a PTS result favouring Hall. Hall continued his mostly successful career with numerous fights following his debut against boxers including John Donnelly, Martin Power and Martin Power. Fights included fighting 2 times in 2008, 5 times in 2009 and 7 times through 2010 and 2011.

Hall then went on to fight and beat Dougie Walton on October 6th, 2008 maintaining his unbeaten record. Becoming the first person to stop Dougie Walton, Hall beat Walton via TKO in the 6th round of a 6 round fight. Fights against boxers including Martin Power, Anthony Hanna and Richard Szebeledi followed where he won 6 fights taking his winning streak to 7 wins.

Pushing his career further, Hall fought Ian Napa on June 4th, 2010 adding to his winning record. Becoming the 2nd fighter to stop Napa, Hall beat Napa via RTD in the 8th round of a 12 round fight. Fights against Martin Power, Gary Davies and John Donnelly followed where he won all 3 fights taking his winning streak to 11 wins.

On May 11th, 2013, Hall went into action again and beat Sergio Perales taking the winning record to 15 wins. In 2013 Hall fought his next opponent in Sergio Perales. A challenging 12 round fight that ended in Hall's favour as the judges awarded Hall the UD victory. Hall was the 2nd person to defeat Perales.

Hall went into his next fight against Lee Haskins on September 10th, 2016 with a career record of 20-5-2. A valiant but fruitless effort for Hall. Hall fell just short and was defeated by Haskins over the full 12 round distance.

Hall went into his next fight against Paul Butler on September 30th, 2017 with a career record of 20 wins. A valiant effort from Hall, but one that was out of his reach technically. The fight came to a close after the final bell in a UD loss for Hall. A setback for Hall pro journey for sure. 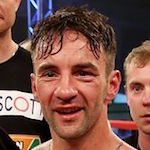