Born February 18th 1987 Lloyd Ellett (aged 33) has built up a good career record of 17-1-0. With plenty of experience and now 18 fights as a pro, Ellett hopes to move on to better things in future as he moves into the later stages of his career. He started his best winning streak on November 2011 however, this came to an end on March 2015. In this period he won a total of 16 fights.

In a successful debut, Ellett fought Bheki Moyo in a 4 round fight defeating him over the distance and becoming only the 36th person to defeat Moyo. Ellett's win streak continued to amass with 9 wins against fighters such as Billy Smith, Dee Mitchell and Kevin Mccauley.

On March 2nd, 2012 Ellett fought and beat Shaunn Watt (0-2-1) to continue his unbeaten streak. Ellett was the 2nd person to stop Shaunn and he did it in the 2nd round via TKO. Ellett then went on to win a further 5 fights taking his record to 8 wins, 0 losses and 0 draws.

Next was Danny Donchev on March 8th, 2013 where Ellett took the win continuing his unbeaten streak. Donchev was stopped in the 1st round via TKO meaning Ellett was the 10th person to stop this opponent.

Sean Lewis was beaten next on July 5th, 2013 meaning Ellett could maintain his unbeaten streak. In 2013 Ellett fought his next opponent Sean Lewis and defeated him via PTS. Ellett was the 5th person to go the distance with Lewis. Ellett then went on to face Gareth Piper where he added another win to his tally.

Keeping his losses at zero, Ellett fought on October 26th, 2013 beating Faheem Khan. Khan was stopped in the 4th round via TKO meaning Ellett was the 2nd person to stop this opponent in his career. 4 wins followed where Ellett went on to be the 26th person to beat Raimonds Sniedze, 14th person to beat Costas Osben and 13th person to defeat Gary Cooper.

Taking the first knock of his career, Ellett fought Ryan Toms on October 2nd, 2015 and was defeated by Toms. Ryan Toms became the first person to stop Ellett. The win came via TKO in the 6th round of a 8 round bout.

The wins continued with the defeat of Faheem Khan on December 4th, 2015 in Ellett's most recent fight taking his winning record to 17 wins. Keeping his record on track, Ellett showed his boxing ability in his most recent fight, taking Faheem Khan the distance and securing a PTS decision victory in a 6 round fight. 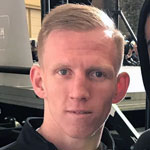 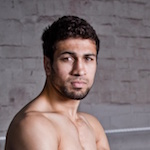