After a debut fight on October 2011, Johnny Garton (age 35) has now built a record of 13 wins, 1 losses, 0 draws over a 14 fight career so far. The longest KO streak that Garton has ever had is 2 throughout his 14 fights and his longest winning streak is 11 wins. This started on October 2011 and came to an end on December 2013.

Garton fought and defeated Danny Donchev in a successful 4 round debut. The decision was left to the judges after the final bell in a PTS result favouring Garton. Maintaining a successful start proved easy for Garton with a further 7 wins, beating boxers such as Jason Nesbitt, Jay Morris and Kevin Mccauley.

Bheki Moyo was beaten next on April 20th, 2012 meaning Garton could maintain his unbeaten streak. The win against Moyo came in the 4th round of a 4 round fight via TKO. Garton was the 5th person to stop Moyo. Garton then went on to win a further 7 fights taking his record to 11 wins, 0 losses and 0 draws.

Taking the first knock of his career, Garton fought Sam Eggington on April 5th, 2014 and was defeated by Eggington. Eggington was a push too far for Garton and after a tough fight Eggington became the first person to beat and stop Garton in round 2.

Garton kept his losses at 1 by beating Vasil Vasilev on October 11th, 2014. Vasilev was stopped in the 5th round via TKO meaning Garton was the 5th person to stop this opponent.

The wins continued with the defeat of Ryan Fields on May 7th, 2016 in Garton's most recent fight taking his winning record to 13 wins. The latest fight for Garton was expected to be a challenging one, but Fields was disposed of in 4 rounds as Garton moves on to greater things and claims the honour of being first person to have ever stopped Ryan Fields. 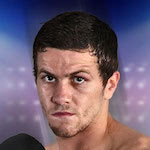