Travis Kauffman's debut fight took place on January 2006 when he was 20 years of age. His career has spanned 10 years to date and whilst he's now in the later stages of his career, he has amassed a record of 31-1-0 over the course of his 33 fight career. Between January 2006 and August 2009, Kauffman had his longest winning streak of 18 fights. In his 33 fights, his longest KO streak is 8 fights long.

In a memorable debut Kauffman gained a TKO win against Jerome Boyer in a 4 round contest, becoming the 2nd person to stop Boyer. Continuing on from his successful debut, Kauffman continued his winning streak by winning his next 16 fights. In this time he fought and beat Josh Gutcher, Malachy Farrell and Cliff Couser to name just a few, fighting 7 times in 2006, 3 times in 2007 and 6 times through 2008 and 2009.

Next was Mike Miller on March 31st, 2006 where Kauffman took the win continuing his unbeaten streak. Continuing his career, Kauffman fought Mike Miller in 2006 over 4 rounds. Kauffman was the 3rd person to go the distance with Mike Miller. Kauffman then went on to win again against David Cleage setting him up well for his next pro fight.

The first defeat of Kauffman's career came against Tony Grano on September 18th, 2009. Grano proved to be too much for Kauffman, destroying him in round 4 via KO and bringing the first stoppage defeat of Kauffman's career. Fights against Ross Thompson, Chris Koval, Vincent Thompson and 7 others followed where he won all 11 fights taking his winning streak to 29 wins.

Epifanio Mendoza was Kauffman's next fight on September 18th, 2015 and also the next win in his career via KO. This took his record to 30-1-0 showing a mainly successful career to date. The win came in the 2nd round of a 8 round fight via KO. Kauffman was the 13th person to stop Epifanio in his career.

Travis Kauffman went into his fight with Josh Gormley on September 9th, 2016 with 30 wins and he added another win to his record taking it to 31 wins by beating Gormley. Kauffman beat Josh Gormley in the 2nd round of a 10 round fight via TKO. Kauffman was the 5th fighter to stop Gormley. 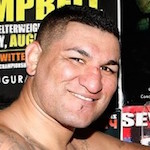