Aged 17, Oho started his career on October 2012. His record is slightly mixed currently standing at 6-1-1. Hopefully more wins will follow. Oho's longest win streak is 6 fights between October 2012 and December 2013. His longest KO streak in his 8 fights is 2 fights long.

Starting as he means to go on, Oho got off to an explosive start in his debut, defeating Takafumi Uetsuki in 1 rounds and becoming the only person to have stopped Uetsuki to date. Oho's rise through the ranks continued with 4 wins against fighters such as Katsunori Shimooki, Takuo Watanabe and Kosuke Tsunoda. This took his record to 4 wins.

Oho then went on to fight and beat Yuji Okinori on November 3rd, 2013 maintaining his unbeaten record. Showing his class against Okinori, Oho was the 6th person to go the distance with this opponent. Taking his record to 6-0-0. Oho then went on to win his next fight against Yukiya Hanabusa.

On April 11th, 2014, Oho took on and was defeated by Jo Tanooka in his first career defeat meaning his career tally went to 6-1-0. Oho's first defeat came over the full distance against Jo Tanooka on April 11th, 2014. The fight went to the judges in a UD loss for Oho.

Ryuto Oho went into his fight with Shuji Hamada on July 18th, 2014 with 6 wins and he added another win to his record taking it to 6 wins by beating Hamada. The 8 round fight against ended in a controversial draw. A disappointing end to a close fight, but one that leads to another potential fight down the line. 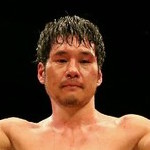