Gonzalez, aged 18, started his career on July 2012. Although still relatively close to the start of his career, his record stands at 8 wins and will hopefully continue to rise. The longest KO streak that Gonzalez has ever had is 1 throughout his 8 fights and his longest winning streak is 8 wins. This started on July 2012 and came to an end on May 2016.

It didn't take Gonzalez long to get accustomed to the pro style of fighting. Becoming the first person to go the distance with Jesus Carmona in a successful pro debut. Taking his record to 4 wins, Gonzalez won his next 4 fights continuing his successful career.

Gonzalez then went on to fight and beat Alex Chavez on May 3rd, 2013 maintaining his unbeaten record. Alex Chavez was Gonzalez's next opponent of his career in 2013. The fight was scheduled for 4 and Gonzalez was the 2nd person to go the distance with Chavez. Gonzalez's winning streak went from 4 wins to 6 after he then defeated boxers including David Reyes and Cesar Martinez.

David Clark was up next for Gonzalez on July 9th, 2014. Gonzalez continued with his winning streak by beating Clark. Clark was stopped in the 2nd round via TKO meaning Gonzalez was the 3rd person to stop this opponent.

Ricardo Proano was beaten by Joet Gonzalez in Gonzalez's most recent fight on May 6th, 2016 to ensure his unbeaten run continued. In 2016 Gonzalez fought and defeated his next opponent Ricardo Proano. In a successful fight, Gonzalez was the 4th person to go the distance with Proano. 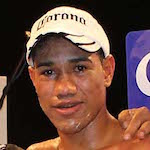