Age 30 orthodox Jono Carroll has now fought 15 fights and remains unbeaten with a record of 15-0-0. Having started his career on November 2017 at age 20, Carroll shows no signs of slowing down as he continues his rise as a pro. The longest KO streak that Carroll has ever had is 1 throughout his 15 fights and his longest winning streak is 15 wins. This started on December 2012 and came to an end on November 2017.

Carroll's pro career began against Matthew Seden (1-5-1) in a 4 round contest. Carroll got the UD win via a judges decision. Continuing on from his winning debut, Carroll's winning streak continued with wins against fighters included Declan Geraghty, Miguel Gonzalez and Michael Devine fighting once in 2012, once in 2013 and 5 times through 2014 and 2015.

Carroll then went on to fight and beat Carlos Perez on April 11th, 2015 maintaining his unbeaten record. Carroll was the 4th person to go the distance with Perez. Carroll fought Carlos Perez in 2015, the result was via PTS. Carroll's wins continued and went from 7 wins to 8 after he then defeated Barrington Brown.

Miguel Gonzalez was up next for Carroll on November 28th, 2015. Carroll continued with his winning streak by beating Gonzalez. Carroll was the 3rd person to go the distance with Gonzalez. Carroll fought Miguel Gonzalez in 2015, the result was via UD. Fights against Juan luis Gonzalez, Damian Lawniczak, Simas Volosinas and 1 other followed where he won all 4 fights taking his winning streak to 13 wins.

Carroll then went on to fight and beat John Quigley on June 17th, 2017 maintaining his unbeaten record. Carroll showed his superior boxing skills to become the first person to beat Quigley. The judges scored the bout in favour of Carroll by SD over the full 12 rounds. 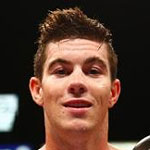