Oleksandr Gvozdyk, born April 15th 1987 made his debut in April 2014. After not putting a foot wrong in 13 fights so far and building an unbeaten record of 13-0-0 it's still unclear just how far Gvozdyk can go at the age of 35. He started his best winning streak on April 2014 however, this came to an end on August 2017. In this period he won a total of 13 fights.

A calm Gvozdyk made the statement he was hoping for in a 6 round fight against Mike Montoya. Claiming the only stoppage defeat of Montoya's career in round 1 of the fight via KO. Continuing on from his winning debut, Gvozdyk's winning streak continued with wins against fighters included Francisco Sierra, Cory Cummings and Otis Griffin fighting 4 times in 2014 and 3 times in 2015.

Cory Cummings was Gvozdyk's next fight on January 24th, 2015 and also his next win in his career. Cummings was stopped in the 2nd round via KO meaning Gvozdyk was the 2nd person to stop this opponent in his career. Gvozdyk then went on to win a further 6 fights taking his record to 11 wins, 0 losses and 0 draws.

Gvozdyk then went on to fight and beat Isaac Chilemba on November 19th, 2016 maintaining his unbeaten record. Chilemba was a worthy challenger but Gvozdyk was too much and became the first person to stop Chilemba via RTD during round 8.

Ensuring he remained unbeaten, Oleksandr Gvozdyk defeated Craig Baker on August 19th, 2017 in his most recent fight. Taking his total win streak to 13 wins, Gvozdyk defeated Baker in the 9 round fight. The win came via TKO in the 6th round. Gvozdyk was the 2nd to stop Baker. 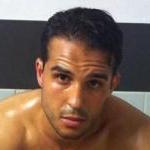