Starting his career aged 17, Saidi's record stands at 6 wins and the unbeaten streak will hopefully continue on. Saidi's longest KO streak is 4 fights long out of his 6 career fights.

A calm Saidi made the statement he was hoping for in a 6 round fight against Eduart Konstan. Claiming the only stoppage defeat of Konstan's career in round 5 of the fight via TKO. Saidi went on to win his next 3 fights taking his record to 3 wins.

3 wins followed for Saidi including being the first to stop Cheikh Fall, 3rd person to stop Manuel Posada (Round 1 TKO) and first to stop Maik Taeubig. December 7th, 2013

Saidi then went on to fight and beat Arber Dodaj on December 7th, 2013 maintaining his unbeaten record. In 2013 Saidi fought his next opponent Arber Dodaj and defeated him via UD. Saidi was the 4th person to go the distance with Dodaj.

The unbeaten run continued with the defeat of Uesame Bozkurt in his latest fight on May 23rd, 2014, taking his winning record to 6 wins. Uesame Bozkurt was Saidi's next opponent of his career with the fight taking place on 2014. The fight was scheduled to last for 8 and Saidi was the 3rd person to go the full distance with Bozkurt and the fight ended in a win for Saidi. 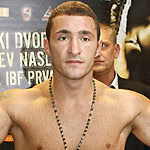