Staritng his career off in tremendous fashion in December 2000, Cruz became the 4th quickest fighter to have ever stopped Alfredo Valdez. The fight ended in round 1 via KO stoppage. Continuing on from his debut, Cruz had an impressive start to his career as he went on to fight 14 fights including once in 2000, 2 times in 2001 and 11 times between 2002 and 2007 against fighters such as Francisco Huerta, Pedro Rincon miranda and Ricardo Barrera.

On January 16th, 2009, Cruz went into action again and beat Leonilo Miranda taking the winning record to 16 wins. Cruz's fight against Leonilo Miranda came in the 5th round of a 10 round fight via KO. Cruz became the first person to stop Miranda.

Keeping his losses at 2, Cruz fought on October 14th, 2011 beating Michael Franco via KO. This took his record to 17-2-1 showing quite the successful career to date. Franco was stopped in the 1st round via KO meaning Cruz was the first person to stop this opponent.

Cruz kept his losses at 4 by beating Romulo Koasicha on March 4th, 2016. Cruz secured the win over Koasicha after the final bell via UD, resulting in Cruz being the 6th person to defeat Koasicha.

Cruz went into his next fight against Terry Flanagan on November 26th, 2016 with a career record of 21 wins. Out for his 27th career fight, Cruz was once again outmatched where he suffered a 8th round TKO loss in only his 4th stoppage defeat to date. Another blow for the talented Cruz. 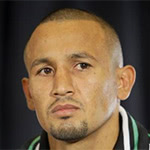