Born July 4th 1991 Abdiel Ramirez (aged 29) has built up a good career record of 22-1-1. With plenty of experience and now 24 fights as a pro, Ramirez hopes to move on to better things in future as he moves into the later stages of his career. Ramirez's longest KO streak is 9 fights long out of his 24 pro career fights.

Starting as he means to go on, Ramirez got off to an explosive start in his debut, defeating Edgar Quiroz in 3 rounds and becoming the only person to have stopped Quiroz to date. Ramirez's rise in boxing continued with 12 fights against fighters such as Sergio Mendoza, Jose Ramirez and Edgar Quiroz. He had a mixed start to his career but mostly successful so far.

On April 29th, 2011 Ramirez fought and beat Fernando Silva (6-3-2) to continue his unbeaten streak. Ramirez's fight against Fernando Silva came in the 3rd round of a 6 round fight via KO. Ramirez became the first person to stop Silva. 9 wins followed where Ramirez went on to fight Jose Ramirez, Alejandro Barrera and Sergio Mendoza amongst others, prolonging his win streak.

Pushing his career further, Ramirez fought Saul Carreon on May 12th, 2012 adding to his winning record. The 12 round fight ended in the 10th round via TKO crowning Ramirez as only the 2nd to stop Carreon.

Ramirez's next defeat of his career came against Rene Gonzalez on July 7th, 2012 taking his career record to 14-1-1. Ramirez was beaten and stopped by Rene Gonzalez in the 2nd round. The win came via TKO in the 2nd round. Fights against Jorge Martinez, Orestes Pereyra, Hector javier Marquez and 3 others followed where he won all 6 fights taking his winning streak to 20 wins.

Ramirez kept his losses at 1 by beating Guadalupe Rosales on November 16th, 2013. Becoming the 2nd fighter to stop Rosales, Ramirez beat Rosales via TKO in the 6th round of a 10 round fight.

The wins continued with the defeat of Guadalupe Rosales on February 22nd, 2014 in Ramirez's most recent fight taking his winning record to 22 wins. Ending via KO, Ramirez became the 3rd fighter to stop Rosales. The defeat came in the 8th round of a 10 round fight. 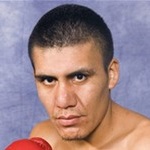