Born March 4th 1981 Oleg Yefimovych (aged 40) has built up a good career record of 26-2-0. With plenty of experience and now 28 fights as a pro, Yefimovych hopes to move on to better things in future as he moves into the later stages of his career. Yefimovych's longest KO streak is 4 fights long out of his 28 career fights.

Starting as he means to go on, Yefimovych got off to an explosive start in his debut, defeating Ruslan Pavlenko in 2 rounds and becoming the only person to have stopped Pavlenko to date. Yefimovych continued his mostly successful career with numerous fights following his debut against boxers including Stanyslav Merdov, Juan Garcia martin and Yuriy Voronin. Fights included fighting once in 2005, 5 times in 2006 and 8 times through 2007 and 2008.

Yefimovych went into his next fight against Alisher Rahimov on October 14th, 2006 with a career record of 4 wins. On October 14th, 2006, Yefimovych took on and was defeated over the distance by Alisher Rahimov in his first career defeat. Yefimovych lost via UD in a valiant effort. Yefimovych's win streak of 4 rose to 13 following 9 great wins, becoming the 3rd person to go the distance with Xia Yu quing, 3rd person to stop Juan Garcia martin and first to stop Mamed Yadgarov.

Sergio Blanco was the next fight for Yefimovych on July 8th, 2008 and also his next career win. Yefimovych showed his superior boxing skills to become the first person to beat Blanco. The judges scored the bout in favour of Yefimovych by UD over the full 12 rounds.

Yefimovych entered his next fight with a mostly successful record of 16-1-0 and took this to 17 wins with a win against Esham Pickering on October 3rd, 2009 via KO. Yefimovych was the 2nd person to stop Esham and he did it in the 3rd round via KO. The fight was due to last 12 rounds. Yefimovych's win streak of 17 rose to 24 following 7 wins against boxers such as Franklin Teran, Andrei Isaeu, Sergio carlos Santillan and 4 others. 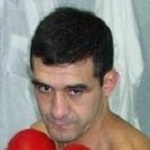