Antonio Orozco started his career aged 35 on June 2008. After 23 fights, Orozco remains unbeaten with no sign of being beaten after building up his record of 22 wins and a career lasting 6 years so far. The longest KO streak that Orozco has ever had is 7 throughout his 23 fights and his longest winning streak is 21 wins. This started on June 2008 and came to an end on October 2014.

A calm Orozco made the statement he was hoping for in a 4 round fight against Ricardo Martinez. Claiming the only stoppage defeat of Martinez's career in round 3 of the fight via TKO. Following his debut, Orozco had an impressive start to his career as he went on to win his next 11 fights including once in 2008, 4 times in 2009 and 6 times through 2010 and 2011 against the likes of Jaime Orrantia, Humberto Tapia and Manuel Aguilar.

Next was Danny Escobar on November 10th, 2012 where Orozco took the win continuing his unbeaten streak. Orozco was the first person to stop Danny Escobar and he did it in the 6th round via KO. Orozco then went on to win again against Jose Reynoso setting him up well for his next pro fight.

Ivan Hernandez was Orozco's next fight on August 24th, 2013 and also his next win in his career. The win happened in the 3rd round of a 10 round fight via KO. Racking up wins against Martin Honorio and Miguel angel Huerta, Orozco went on to fight and win these next 2 fights.

Steve Forbes was beaten next on October 10th, 2014 meaning Orozco could maintain his unbeaten streak. Orozco secured the win over Forbes after the final bell via UD, resulting in Orozco being the 14th person to defeat Forbes.

Antonio Orozco added another win to his record by beating Keandre Gibson on April 1st, 2017, upping his record to 22 wins. In an impressive showing of his boxing ability, Orozco outclassed Gibson in his latest performance, claiming the round 3 TKO and becoming the first person of 14 to have stopped Gibson. 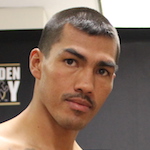