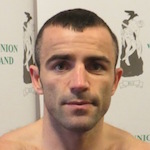 Stephen Ormond started off his pro career aged 25 and currently has a record of 21-2-0. Ormond now looks to build on the experience gained in his first 23 fights. Ormond's longest KO streak is 3 fights long out of his 23 pro career fights.

Ready to showcase his talent in the pro ranks, Ormond defeated Juris Ivanovs over 4 rounds in his debut to secure his first win (PTS) against a durable Ivanovs. Ormond continued his pro journey, which was mostly successful at this point, by fighting 12 fights following his debut. Fights against boxers such as Mickey Coveney, Sergi Ganjelashvili and Sebastien Cornu followed including once in 2008, 5 times in 2009 and 6 times through 2010, 2011 and 2012.

Furthering his career, Ormond fought Adam Mate on September 20th, 2013 and continued his career to a record of 14-1-0. The win came via TKO. Mate was stopped in the 1st round via TKO meaning Ormond was the first person to stop this opponent.

Ormond went into his next career fight with a record of 14-1-0 and took this to 15 wins with a win against Adam Dingsdale on October 7th, 2013. A great showing of his boxing ability, Ormond became the first person to beat Adam Dingsdale, beating him over the 10 round distance resulting in a UD victory. Ormond continued his success in the next 5 fights taking his record to 19 wins, 2 losses and 0 draws.

Furthering his career, Ormond fought Orlando Vazquez on October 30th, 2015 and continued his career to a record of 20-2-0. The win came via TKO. The win happened in the 4th round of a 8 round fight via TKO.