A calm Toygonbayev made the statement he was hoping for in a 4 round fight against Alfredo Cervantes. Claiming the only stoppage defeat of Cervantes's career in round 1 of the fight via TKO. Toygonbayev continued his pro journey, which was mostly successful at this point, by fighting 20 fights following his debut. Fights against boxers such as Oba Carr, Nicholas Martinez and Ronald Weaver followed including 2 times in 1997, 2 times in 1998 and 14 times between 1999 and 2002.

Unfortunately, the first defeat of Toygonbayev's career came against Kassim Ouma on October 13th, 2000 in Toygonbayev's 11th professional fight. Toygonbayev's technical boxing ability was put to the test as he got outpointed in the 6 round fight against the better man. Ouma gave Toygonbayev his first professional loss of his 13 fight career to date. Fights against Nicholas Martinez, Ronald Weaver, Oba Carr and 3 others followed where he won all 6 fights taking his winning streak to 18 wins.

Toygonbayev kept his losses at 1 by beating Leon Pearson on October 5th, 2002. Becoming the first person to stop Leon Pearson, Toygonbayev beat Pearson via TKO in the 7th round of a 8 round fight. Toygonbayev continued his success in the next 6 fights taking his record to 23 wins, 3 losses and 0 draws.

Toygonbayev went into his next fight against Dmitry Pirog on December 6th, 2008 with a career record of 29-5-0. Pirog upset Toygonbayev in a 12 round fight, stopping him in the 5th round and becoming only the 2nd person to stop Toygonbayev.

In Toygonbayev's most recent fight, Nozim Turaboev was handed a beating by Toygonbayev on May 28th, 2010 to ensure his win record increased further again to 31 wins. Toygonbayev took Turaboev the distance and became only the 6th person to defeat Turaboev. Made the decision not to fight again and end his career on a high after 37 pro fights. 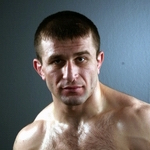