Before finishing his career in June 2008 orthodox boxer Cuevas built up a record of 26 wins, 1 draws, and 10 losses, starting at age 25 on February 1995 and ending 13 years later at . The longest win streak that Cuevas has ever recorded was between February 1995 and April 1998 when it totaled 13 wins. Cuevas's longest KO streak is 4 fights long.

Starting as he means to go on, Cuevas got off to an explosive start in his debut, defeating Tim Sager in 1 rounds and becoming the only person to have stopped Sager to date. Following his debut, Cuevas had an impressive start to his career as he went on to win his next 17 fights including 6 times in 1996, 2 times in 1997 and 9 times through 1998, 1999 and 2000 against the likes of Anthony Ivory, Sam Hill and Albertano Caballero.

On November 5th, 2004, Cuevas went into action again and beat Daniel Neal taking the winning record to 24 wins. Cuevas was the 5th person to beat Daniel Neal where he showed his talent as a technical boxer, beating him over 6 rounds in his 28th professional fight. Another win followed for Cuevas taking his win tally to 25 wins.

Cuevas went into his next fight against Kassim Ouma on October 13th, 2005 with a career record of 25-8-1. Taking a huge blow to Cuevas's confidence, Ouma proved to be too much and stopped Cuevas early, becoming the first person to defeat Cuevas via stoppage.

The next defeat of Cuevas's career came against Marco antonio Rubio on June 6th, 2008. This took his career record to 26-10-1. This turned out to be Cuevas's last career fight, bringing Cuevas's 37 fight career to an end on November 21st, 2018. Rubio was too much for Cuevas and became the 3rd person to stop him. 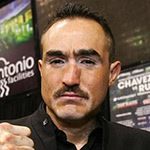