Starting off his pro career on July 2010 age 25, Ryno Liebenberg has had a total of 19 fights - 16 wins, 3 losses, and 0 draws. 11 of the wins coming via stoppage. The longest win streak that Liebenberg has ever recorded was between July 2010 and August 2014 when it totaled 16 wins. Liebenberg's longest KO streak is 5 fights long.

Getting rid of his debut fight nerves early, Liebenberg took on Caster Ndou in July 2010 and claimed a stoppage victory (round 3, KO). Liebenberg was the first person to have ever stopped Ndou. Maintaining a successful start proved easy for Liebenberg with a further 10 wins, beating boxers such as Johnny Muller, Tshepang Mohale and David Basajjamivule.

Next was Donald Kampamba on November 10th, 2012 where Liebenberg took the win continuing his unbeaten streak. Becoming the first person to stop Donald Kampamba, Liebenberg beat Kampamba via KO in the 9th round of a 12 round fight. Fights against Flash Issaka, Johnny Muller, Daniel adotey Allotey and 1 other followed where he won all 4 fights taking his winning streak to 14 wins.

Liebenberg entered his next fight with 14 wins and took this to 15 with a win against Joey Vegas on March 1st, 2014. The win came in the 1st round of a 12 round fight via TKO. Liebenberg was the 3rd person to stop Joey in his career. Another win followed for Liebenberg taking his win tally to 16 wins.

Taking another knock in his career, Liebenberg fought Enrico Koelling on October 1st, 2016 and was defeated by Koelling. A valiant effort from Liebenberg, but one that was out of his reach technically. The fight came to a close after the final bell in a SD loss for Liebenberg. A setback for Liebenberg pro journey for sure. 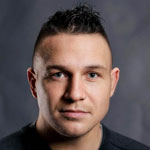