Hardy's pro career began against Kevin Downer (0-1-0) in a 6 round contest. Hardy got the PTS win via a judges decision. Following on from his debut, Hardy continued his mostly successful career by fighting in a further 24 fights. In this time he fought John Hyland, Ronnie Carroll and Keith Wallace to name just a few, fighting 2 times in 1983, 9 times in 1984 and 13 times between 1985 and 1989 in this period.

Hardy went into his next fight against Valerio Nati on June 7th, 1985 with a career record of 11-3-0. Hardy fought Valerio Nati and was defeated via TKO in the 0 round bout. This was Hardy's 2nd stoppage defeat in his career which came in the 4th round. Hardy then went on to win a further 17 fights taking his record to 25 wins, 5 losses and 1 draw.

Hardy lost to Orlando Canizales in his next fight. Taking place on May 4th, 1991, Hardy's career record after this fight stood at 25-6-1. Hardy was beaten by Orlando Canizales in the 8th round. Hardy had only ever been stopped 3 times previously in his career. 14 wins followed where Hardy went on to fight Mehdi Labdouni, Stefano Zoff and Percy Commey amongst others, prolonging his win streak.

On January 27th, 1998, Hardy went into action again and beat Mehdi Labdouni taking the winning record to 37 wins. Labdouni was a great challenge for Hardy, losing over the full 12 round distance and crowning Hardy as the 6th person to have defeated Labdouni.

The next defeat of Hardy's career came against Paul Ingle on September 26th, 1998. This took his career record to 37-9-2. This turned out to be Hardy's final career fight. Ingle became the 5th person to stop Hardy in round 8 of a 12 round fight via TKO. 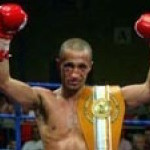