"the special one / special k"

Born May 3rd 1986, orthodox fighter Kell Brook started his career in September 2004 at the age of 18 and has now been pro for 13 years, fighting a total of 39 times. The longest KO streak that Brook has ever had is 8 throughout his 39 fights and his longest winning streak is 36 wins. This started on September 2004 and came to an end on March 2016.

Brook fought and defeated Peter Buckley in a successful 6 round debut. The decision was left to the judges after the final bell in a PTS result favouring Brook. Brook continued on his journey to success by fighting 5 times in 2004, 4 times in 2005 and 11 times between 2006 and 2009 beating fighters such as Michael Lomax, Kevin Mcintyre and Barrie Jones in his next 20 fights.

Keeping his losses at zero, Brook fought on March 28th, 2015 beating Ionut dan Ion. Brook's fight against Ionut dan Ion came in the 4th round of a 12 round fight via RTD. Brook became the first person to stop Ion. Brook's winning streak went from 34 wins to 36 after he then defeated boxers including Frankie Gavin and Kevin Bizier.

The first defeat of Brook's career came against Gennady Golovkin on September 10th, 2016. This took his career record to 36-1-0. Golovkin was a push too far for Brook and after a tough fight Golovkin became the first person to beat and stop Brook in round 5.

Errol Spence jr was next in line for Brook where unfortunately, he was defeated on May 27th, 2017 taking his record to 36-2-0. Brook fought Errol Spence jr and was defeated via TKO in the 12 round bout. This was Brook's 2nd stoppage defeat in his career which came in the 11th round.

Ensuring he added another win to his tally, Kell Brook defeated Sergey Rabchenko on March 3rd, 2018 in his latest fight. The most recent outing for Brook proved one that was easier than expected. Rabchenko was left wanting as the fight ended in round 2 of 12 (KO). Brook now moves on to hopefully face some of the bigger names in the division. 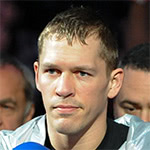