After a debut fight on September 2012, Jose carlos Paz (age 31) has now built a record of 16 wins, 3 losses, 0 draws over a 20 fight career so far. The longest win streak that Paz has ever recorded was between September 2012 and September 2014 when it totaled 14 wins. Paz's longest KO streak is 4 fights long.

Setting up his pro career well and building his confidence in the pro ring, Paz became the 2nd person to take Jose luis Bataglia the distance and claimed a UD debut win. Paz continued his pro journey by fighting 10 fights following their debut. Fights against boxers such as Luis antonio Garay, Dante cesar Pereyra and Luis alejandro Tejerina followed including 2 times in 2012 and once in 2014.

On October 20th, 2012, Paz took on and was defeated by Brian carlos Castano in his first career defeat meaning his career tally went to 1-1-0. Paz was beaten by Brian carlos Castano in the 5th round. The win came via TKO in the 5th round. Fights against Luis antonio Garay, Luciano daniel Lasa, Dante cesar Pereyra and 4 others followed where he won all 7 fights taking his winning streak to 8 wins.

Paz kept his losses at 1 by beating Luis alejandro Tejerina on February 21st, 2014. Tejerina was a worthy challenger but Paz was too much and became the first person to stop Tejerina via TKO during round 8. Fights against boxers including Pablo martin Roldan, Carlos saul Chumbita and Devis Caceres followed where he won 7 fights taking his winning streak to 15 wins.

Paz kept his losses at 2 by beating Marcelo Fabian Caceres on October 3rd, 2015. Caceres was a worthy challenger but Paz was too much and became the first person to stop Caceres via TKO during round 5.

On February 10th, 2018, Paz took on and was defeated by Jaime Munguia meaning his career tally went to 16-3-0 A great performance by opponent Munguia added a 2nd stoppage defeat to Paz's career. Paz was outmatched and the fight was brought to a halt in round 3 via KO. 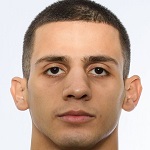