Born September 13th 1990 Roberto Gonzales (aged 32) has built up a good career record of 24-2-0. With plenty of experience and now 26 fights as a pro, Gonzales hopes to move on to better things in future as he moves into the later stages of his career. Gonzales's longest KO streak is 5 fights long out of his 26 career fights.

Gonzales made an impressive debut on May 2008, showing his class and technical boxing skill Gonzales went the full 4 rounds with Salidaga and became the first person to do so. Gonzales continued on his journey to success by fighting 7 times in 2008 and 6 times in 2009 beating fighters such as Nelson Sungahid, Elmar Francisco and Richard Laano in his next 13 fights.

Esmalben Bujas was beaten next on August 16th, 2008 meaning Gonzales could maintain his unbeaten streak. Bujas was stopped in the 1st round via TKO crowning Gonzales as the first person to stop this opponent. Gonzales then went on to win a further 12 fights taking his record to 16 wins, 0 losses and 0 draws.

Taking the first knock of his career, Gonzales fought Ryan Sermona on May 13th, 2012 and was defeated by Sermona. Sermona was a push too far for Gonzales and after a tough fight Sermona became the first person to beat and stop Gonzales in round 5.

Gonzales lost to Hirohito Fukuhara in his next fight. Taking place on November 18th, 2012, Gonzales's career record after this fight stood at 20-2-0. Gonzales was stopped by Hirohito Fukuhara in the 3rd round of a 8 round fight via KO. It was Gonzales's 2nd stoppage defeat in his career. Gonzales took on another 2 opponents next, racking up wins against Richard Olisa and Roselito Campana.

Gonzales entered his next fight with a mostly successful record of 22-2-0 and took this to 23 wins with a win against Ronald Postrano on March 29th, 2014 via TKO. Becoming the 10th fighter to stop Postrano in his career, Gonzales beat Postrano via TKO in the 4th round of a 10 round fight.

The wins continued with the defeat of Mark Sales on September 26th, 2014 in Gonzales's most recent fight taking his winning record to 24 wins. Gonzales beat Mark Sales in the 3rd round of a 10 round fight via KO. Gonzales was the 5th fighter to stop Sales. 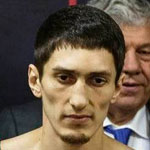