Enguema started his career on June 2013. His career record to date stands at 7 wins and he remains unbeaten. Between June 2013 and July 2016, Enguema had his longest winning streak of 7 fights. In his 7 fights, his longest KO streak is 2 fights long.

Getting rid of his debut fight nerves early, Enguema took on Jimmy Diouf in June 2013 and claimed a stoppage victory (round 1, TKO). Enguema was the first person to have ever stopped Diouf. Enguema's rise through the ranks continued with 4 wins against fighters such as Alberto Morais, Jimmy Diouf and Lucian Danilencu. This took his record to 4 wins.

Lucian Danilencu was beaten next on May 18th, 2014 meaning Enguema could maintain his unbeaten streak. Becoming the first person to stop Lucian Danilencu, Enguema beat Danilencu via TKO in the 3rd round of a 4 round fight. Enguema then went on to win again against Antonio Sousa setting him up well for his next pro fight.

Carlos Caicedo was up next for Enguema on June 11th, 2016. Enguema continued with his winning streak by beating Caicedo. Continuing his career, Enguema fought Carlos Caicedo in 2016 over 4 rounds. Enguema was the 6th person to go the distance with Carlos Caicedo.

Gheorghe Danut was beaten by Gabriel Enguema in Enguema's most recent fight on July 22nd, 2016 to ensure his unbeaten run continued. Taking his total win streak to 7 wins, Enguema defeated Danut in the 4 round fight. The win came via TKO in the 4th round. Enguema was the 3rd to stop Danut. 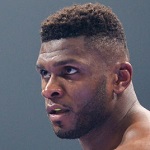